Ra's In-depth Analysis of Archetype 7: The Great Way Of The Mind - The Chariot 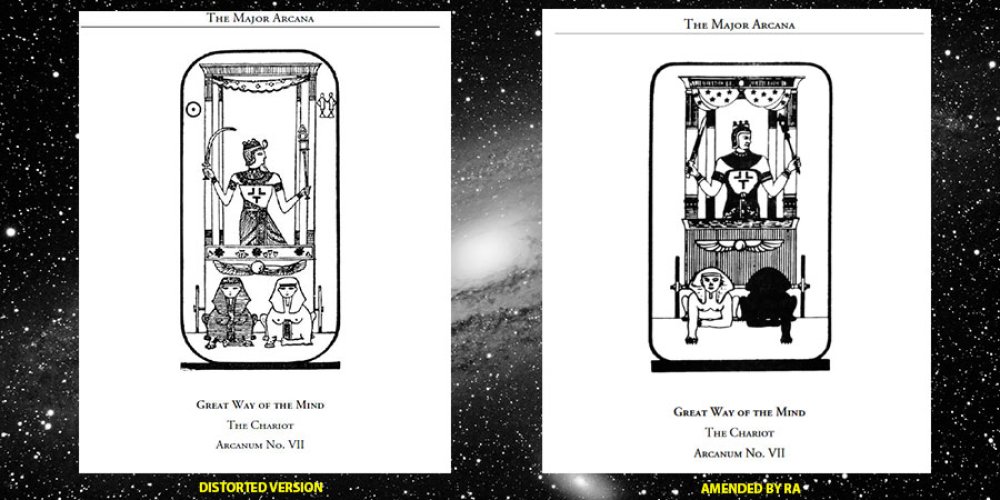 We will probably return to this card in the next session with more observations after we consider Ra’s comments.

To make efficient use of our time at this time I will make some notes with respect to Card Seven.

First, the veil between the conscious and unconscious mind is removed.

The veil, I assume, is the curtain at the top and is lifted.

Even though this veil has been removed the perception of intelligent infinity is still distorted by the beliefs and means of seeking of the seeker.

Ra: I am Ra. As one observes the veil of the image of the Great Way of Mind it may be helpful to ideate using the framework of environment.

The Great Way of Mind, Body, or Spirit is intended to limn the milieu within which the work of mind, body, or spirit shall be placed.

Thusly, the veil is shown both somewhat lifted and still present, since the work of mind and its transformation involves progressive lifting of the great veil betwixt the conscious and deep minds.

The complete success of this attempt is not properly a portion of third-density work and, more especially, third-density mental processes.

Questioner: The fact that the veil is raised higher on the right-hand side indicates to me that the adept choosing the positive polarity would have greater success in penetrating the veil.

Ra: I am Ra. This is a true statement if it is realized that the questioner speaks of potential success.

Indeed, your third-density experience is distorted or skewed so that the positive orientation has more aid than the so-called negative.

Questioner: It would also seem to me that, since Ra stated in the last session that the limit of the viewpoint is the source of all distortions9, the very nature of the service-to-self distortions that create the left-hand path are a function of the veil.

Therefore, they are dependent, you might say, to some degree on at least a partial continued veiling.

Does this make any sense?

Ra: I am Ra. There is the thread of logic in what you suppose.

The polarities are both dependent upon a limited viewpoint.

the negative polarity
depends more heavily upon the illusory separation betwixt the self and all other mind/body/spirit complexes.

The positive polarity
attempts to see through the illusion to the Creator in each mind/body/spirit complex, but for the greater part is concerned with behaviors and thoughts directed towards other-selves in order to be of service.

This attitude, in itself, is full of the stuff of your third-density illusion.

9 Ra made this statement in response to a personal question which, along with its answer, was removed from the last session.

Questioner: The crown of three stars, we are guessing, would represent the balancing of the mind, body, and spirit.

Ra: I am Ra. This device is astrological in origin and the interpretation given somewhat confusing.

We deal, in this image, with the environment of mind.

It is perhaps appropriate to release the starry crown from its stricture.

Questioner: The small black-or russet-and white entities have changed so that they now appear to be sphinxes which we are assuming means that the catalyst has been mastered.

I am also assuming that they act as the power that moves the chariot depicted here so this mastery enables the mind in its transformation to become mobile unlike it was prior to this mastery, locked as it was within the illusion.

Ra: I am Ra. Firstly, we ask that the student consider the Great Way not as the culmination of a series of seven activities or functions but as a far more clearly delineated image of the environment within which the mind, body, or spirit shall function.

Therefore, the culturally determined creatures called sphinxes do not indicate mastery over catalyst.

The second supposition, that of placing the creatures as the movers of the chariot of mind, has far more virtue.

You may connote the concept of time to the image of the sphinx.

The mental and mental/emotional complex ripens and moves and is transformed in time.

Questioner: There is the forty-five minute signal.

Does Ra suggest a termination of this session, taking into consideration the instrument’s condition?

Ra: I am Ra. Information pertinent to this query has been previously covered.

The choice of termination time, as you call it, is solely that of the questioner until the point at which we perceive the instrument beginning to use its vital resources due to the absence of transferred or native physical energy.

The instrument remains open, as always.

Questioner: In that case I will ask only one more question and that will have to do with the sword and the scepter.

However, they seem to be in the opposite hands than I would have guessed.

Ra: I am Ra. These symbols are astrological in origin.

The shapes, therefore, may be released from their stricture.

We may note that there is an overriding spiritual environment and protection for the environment of the mind.

We may further note that

the positively polarized entity
may hold forth that which is exemplified by the astrological sword; that is, light and truth.

Questioner: Would there be two more appropriate objects or symbols to have the entity in Card Seven holding other than the ones shown?

Ra: I am Ra. We leave this consideration to you, O student, and shall comment upon any observation which you may make.

Questioner: In that case I have a few questions on Card Number Seven in order to finish off our first run-through of the archetypes of the mind.

There is a T with two right angles above it on the chest of the entity on Card Seven.

We have guessed that the lower T has to do with the possibility of choosing either path in the transformation and the upper two angles represent the great way of the left and the right-hand paths in the mental transformation that makes the change from space/time into time/space, you might say.

This is difficult to express.

Is anything correct in this?

Ra: I am Ra. The use of the tau11 and the architect’s square is indeed intended to suggest the proximity of the space/time of the Great Way’s environment to time/space.

We find this observation most perceptive.

The entire mood, shall we say, of the Great Way is indeed dependent upon its notable difference from the Significator.

The Significator is the significant self, to a great extent but not entirely influenced by the lowering of the veil.

The Great Way of the Mind, the Body, or the Spirit draws the environment which has been the new architecture caused by the veiling process and, thusly, dipped in the great, limitless current of time/space.

Questioner: I am guessing that the wheels of this chariot indicate the ability of the mind to be able to move in time/space. Is this correct?

Ra: I am Ra. We cannot say that the observation is totally incorrect, for there is as much work in time/space as the individual who evokes this complex of concepts has assimilated.

However, it would be more appropriate to draw the attention to the fact that although the chariot is wheeled, it is not harnessed to that which draws it by a physical or visible harness.

What then, O Student, links and harnesses the chariot’s power of movement to the chariot?

Questioner: I’ll have to think about that.

I’ll come back to that.

We were thinking of replacing the sword in the right hand with the magical sphere and putting a downward-pointing scepter in the left hand, similar to Card Five, the Significator, as symbols more appropriate for this card.

Ra: I am Ra. This is quite acceptable, especially if the sphere may be imaged as spherical and effulgent.

Questioner: The bent left leg of the sphinxes indicates a transformation that occurs on the left that doesn’t occur on the right, possibly an inability in that position to move.

Does this have any merit?

Ra: I am Ra. The observation has merit in that it may serve as the obverse of the connotation intended.

The position is intended to show two items, one of which is the dual possibilities of the time-full characters there drawn.

The resting is possible in time, as is the progress.

If a mixture is attempted, the upright, moving leg will be greatly hampered by the leg that is bent.

The other meaning has to do with the same right angle, with its architectural squareness, as the device upon the breast of the actor.

Time/space is close in this concept complex, brought close due to the veiling process and its efficaciousness in producing actors who wish to use the resources of the mind in order to evolve.

Is this roughly correct?

Ra: I am Ra. Please expel breath over the breast of the instrument from right to left.

(This was done as directed.)

We might also note that we, in forming the original images for your peoples, were using the cultural commonplaces of artistic expression of those in Egypt.

The face is drawn to the side most often, as are the feet turned.

We made use of this and, thus, wish to soften the significance of the side-long look.

Questioner: Our appropriate time limit for this working, I believe, is rapidly approaching, so I would like to ask what was the problem in this session when twice in this session we had to expel breath over the instrument’s chest?

Ra: I am Ra. This instrument is unaware of the method used to contact Ra.

However, its desire was particularly strong, at the outset of this working, for this working to transpire.

Thus it inadvertently was somewhat premature in its leaving of the yellow-ray, physical body.

In this state the object was dropped upon the instrument which you call the tie-pin microphone.

The unexpected contact caused injury of the chest muscles and we would advise some care depending from this working to avoid stress so that this injury may heal.

There is a metaphysical component to this injury and, therefore, we wished to be quite sure that all portions of the environment were cleansed.

Since this place of working has not its usual level of protection we used your breath to so cleanse the environment, which was at risk.

Questioner: Is the reason for this lack of protection the fact that it has been a considerable time since we have worked in here?

Questioner: What is the reason?

Ra: I am Ra. The lack of regular repetition of the so-called Banishing Ritual is the lack of which we spoke.

Questioner: From this I assume that it would be most appropriate to perform the Banishing Ritual daily in this room. Is this correct?

Ra: I am Ra. That is acceptable.