Ra's In-depth Analysis of Archetype 5: Significator Of The Mind - The Hierophant 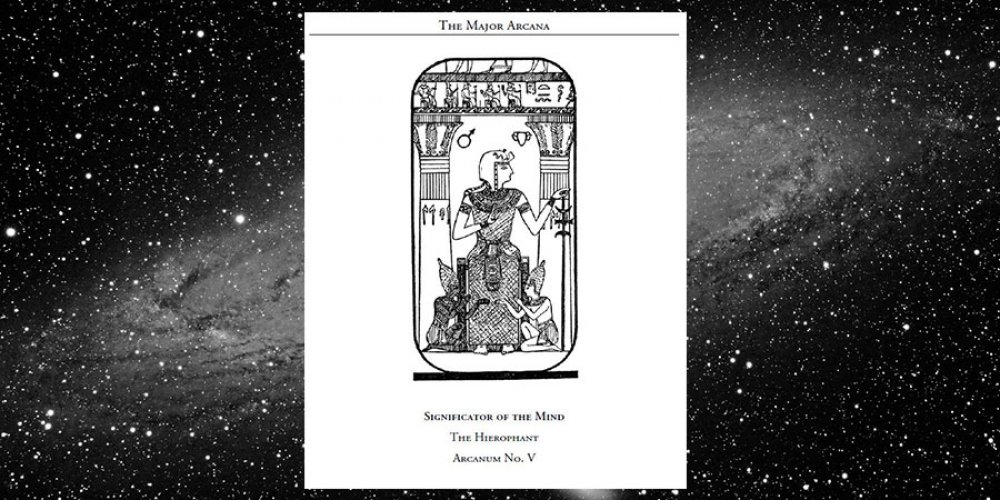 Questioner: Would the Hierophant then be somewhat of a governor or sorter of these effects so as to create the proper assimilation by the unconscious of that which comes through the conscious?

Ra: I am Ra. Although thoughtful, the supposition is incorrect in its heart.

Questioner: What would be the Hierophant?

Ra: I am Ra. The Hierophant is the Significator of the Body [Mind2] complex, its very nature.

2 Ra corrected this error in Session #80. The Hierophant is the Significator of the Mind.

We may note that the characteristics of which you speak do have bearing upon the Significator of the Mind complex but are not the heart.

The heart of the mind complex is that dynamic entity which absorbs, seeks, and attempts to learn.

Questioner: Then is the Hierophant that link, you might say, between the mind and the body?

Ra: I am Ra. There is a strong relationship between the significators of the mind, the body, and the spirit.

Your statement is too broad.

Questioner: Then I will just ask about the one of the archetypes which I am the least able to understand at this point if I can use that word at all.

I am still very much in the dark, so to speak, in respect to the Hierophant and precisely what it is.

Could you give me some other indication of what that is?

Ra: I am Ra. You have been most interested in the Significator which must needs become complex.

The Hierophant
is the original archetype of mind which has been made complex through the subtile movements of the conscious and unconscious.

The complexities of mind were evolved rather than the simple melding of experience from Potentiator to Matrix.

The mind itself became an actor possessed of free will and, more especially, will.

As the Significator of the mind, the Hierophant has the will to know, but what shall it do with its knowledge, and for what reasons does it seek?

The potentials of a complex significator are manifold.

Are there any brief queries at this working?

Ra: I am Ra. We greet you in the love and in the light of the one infinite Creator.

Before we initiate this working we would wish to correct an error which we have found in previous material.

That Archetype Five which you have called the Hierophant is the Significator of the Mind complex.

This instrument is prey to sudden flares towards the distortion known as pain.

We are aware of your conscientious attempts to aid the instrument but know of no other modality available to the support group other than the provision of water therapy upon the erect spinal portion of the physical body complex, which we have previously mentioned.

This instrument’s distortions of body do not ever rule out, shall we say, such flares during these periods of increased distortion of the body complex.

Therefore, we request that any information which seems garbled be questioned as we wish this contact to remain as undistorted as the limitations of language, mentality, and sensibility allow.

Card Number Five, the Significator of the Mind, indicates, firstly, as I see it, simply a male within a rectangularly structured form which suggests to me that the Significator of the Mind in third density is well bounded within the illusion, as is also suggested by the fact that the base of the male is a rectangular form showing no ability for movement.

Ra: I am Ra. O student, you have grasped the barest essence of the nature of the Significator’s complete envelopment within the rectangle.

Consider for the self, O student, whether your thoughts can walk.

The abilities of the most finely honed mentality shall not be known without the use of the physical vehicle which you call the body.

Through the mouth the mind may speak.

Through the limbs the mind may affect action.

Questioner: The entity looks to the left, indicating that the mind has the tendency to notice more easily catalyst of a negative essence.

Ra: I am Ra. This is substantially correct.

Questioner: There are two small entities at the bottom, one black and one white.

I will first ask Ra if this drawing is correct in the coloring?

Is the black one in the proper position with respect to Ra’s original drawings?

Ra: I am Ra. That which you perceive as black was first red.

Other than this difference, the beings in the concept complex are placed correctly.

Questioner: The red coloration is a mystery to me.

We had originally decided that these represented the polarization of the mind.

Ra: I am Ra. The indications of polarity are as presumed by the questioner.

The symbolism of old for the left-hand path was the russet coloration.

We shall pause at this time if the questioner will be patient.

There are fairly serious difficulties with the instrument’s throat.

We shall attempt to ameliorate the situation and suggest the rewalking of the Circle of One.

(The Circle of One was rewalked and breath expelled two feet above the instrument’s head.)

Ra: I am Ra. Please continue.

Questioner: What was the nature of the problem?

Ra: I am Ra. The fifth-density entity which greets this instrument affected a previous difficulty distorting the throat and chest area of the instrument.

Some fraction of this distortion remained unmentioned by the instrument.

It is helpful if the instrument speaks as clearly as possible to the support group of any difficulties that more care may be taken.

However, we find very little distortion left in the chest area of the instrument.

However, immediately preceding the working the instrument was offered an extreme activation of what you may call the allergies and the mucous from the flow which this distortion causes began to cause difficulty to the throat.

At this juncture the previous potential for the tightening of the throat was somewhat activated by reflex of the yellow-ray, chemical body over which we have only gross control.

We would appreciate you reminding us to cause this instrument to cough before or after each query for the remainder of this working.

Once conscious, this instrument should have no serious difficulty.

Questioner: I was wondering why the dark entity was on the right side of the card in relation to the Significator.

Could Ra comment on that after making the instrument cough?

I am Ra. There was a serious pain flare.

We may now continue.

The nature of polarity is interesting in that those experiences offered to the Significator as positive frequently become recorded as productive of biases which may be seen to be negative, whereas the fruit of those experiences apparently negative is frequently found to be helpful in the development of the service-to-others bias.

As this is perhaps the guiding characteristic of that which the mind processes and records, these symbols of polarity have thusly been placed.

You may note that the hands of the central image indicate the appropriate bias for right and left-hand working; that is, the right hand gestures in service-to-others, offering its light outward.

The left hand attempts to absorb the power of the spirit and point it for its use alone.

Questioner: The eight cartouches at the bottom would possibly signify the energy centers and the evolution through those centers with the possibility for positive or negative polarization because of the white and black coloration of the figures.

Would Ra comment on that after making the instrument cough?

Ra: (Cough) I am Ra. The observations of the student are perceptive.

It is informative to continue the study of octaves in association with this concept complex.

Many are the octaves of a mind/body/spirit complex’s beingness.

There is not one that does not profit from being pondered in connection with the considerations of the nature of the development of polarity exemplified by the concept complex of your Card Number Five.

Questioner: Do the symbols on the face of each of these little cartouches such as the birds and the other symbols have a meaning in this card that is of value in considering the archetypes?

Could you answer that after making the instrument cough?

Ra: (Cough) I am Ra. These symbols are letters and words much as your language would receive such an entablature.

They are, to a great extent, enculturated by a people not of your generation.

Let us, in the rough, suggest that the information written upon these cartouches be understood to be such as the phrase, “And you shall be born again to eternal life.”

I thought that the wings on top of the card might indicate the protection of the spirit over the process of evolution.

Would Ra comment on that after having the instrument cough?

Ra: (Cough) I am Ra. We shall end this session for we are having considerable difficulty in using the sympathetic nervous system in order to aid the instrument in providing sufficient of your air for its respiration.

Is there any brief query before we leave this instrument?

Questioner: The wings above Card Five, I am guessing, have to do with a protection over the Significator of the Mind.

I am guessing that they are a symbol of protection.

Ra: I am Ra. Let us say that you are not incorrect but rather less than correct.

The Significator owns a covenant with the spirit which it shall in some cases manifest through the thought and action of the adept.

If there is protection in a promise, then you have chosen the correct sound vibration, for the outstretched wings of spirit, high above manifestation, yet draw the caged mind onward.

Last modified on Tuesday, 10 December 2019 22:49
Tweet
More in this category: Ra's In-depth Analysis of Archetype 6: Transformation Of The Mind - The Lovers or Two Paths »
Login to post comments
back to top