Ra's In-depth Analysis of Archetype 2: Potentiator Of The Mind - The High Priestess 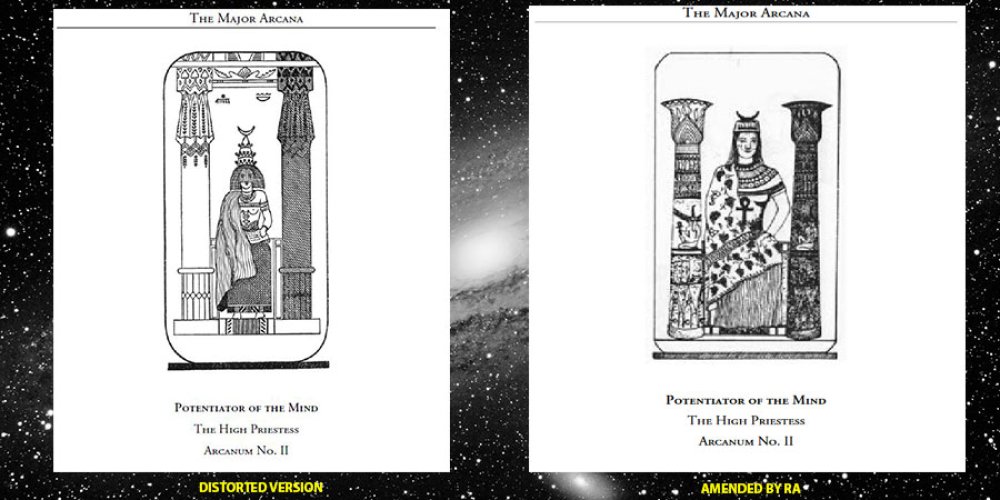 In Card #2, the Potentiator of the Mind,

we see a female seated on a rectangular block.

She is veiled and sitting between two pillars which seem to be identically covered with drawings but one is much darker than the other.

I am assuming that the veil represents the veil between the conscious and subconscious or Matrix and Potentiator of the Mind.

Questioner: I am assuming that she sits between the different colored columns, with the dark one on her left, to indicate at this position an equal opportunity for the potentiation of the mind to be of the negative or positive nature.

Ra: I am Ra. Although this is correct it is not as perceptive as the notice that the Priestess, as this figure has been called, sits within a structure in which polarity, symbolized as you correctly noted by the light and dark pillars, is an integral and necessary part.

The unfed mind has no polarity just as intelligent infinity has none.

The nature of the sub-sub-sub-Logos which offers the third-density experience is one of polarity, not by choice but by careful design.

We perceive an unclear statement.

The polarity of Potentiator is there not for the Matrix to choose.

It is there for the Matrix to accept as given.

Questioner: In other words, this particular illusion has polarity as its foundation which might be represented by the structural significance of these columns. Is this correct?

Questioner: It seems to me that the drawings on each of these columns are identical but that the left-hand column, that is the one on the Priestess’s left, has been shaded much darker indicating that the events and the experiences may be identical in the incarnation but may be approached, viewed, and utilized with either polarity.

You will note also, from the symbol denoting spirit in manifestation upon each pillar, that the one infinite Creator is no respecter of polarity but offers Itself in full to all.

Questioner: There seems to be a book on the Priestess’s lap which is half hidden by a robe or material that covers her right shoulder.

It would seem that this indicates that knowledge is available if the veil is lifted but is not only hidden by the veil but is hidden partially by her very garment which she must somehow remove to become aware of the knowledge which she has available.

Ra: I am Ra. In that the conceit of the volume was not originated by Ra we ask that you release the volume from its strictured form.

Your perceptions are quite correct.

All robes, in this case
indicating the outer garments of custom, shield these principles.

Thusly there is great dynamic tension, if you will, betwixt the Matrix and the Potentiator of the Mind.

Questioner: Are there any other parts of this picture that were not given by Ra?

Ra: I am Ra. The astrological symbols offered are not given by Ra.

Questioner: The fact that the Priestess sits atop the rectangular block indicates to me that the Potentiator of the Mind has dominance or is above the material illusion.

Ra: I am Ra. Let us say, rather, that this figure is immanent, near at hand, shall we say, within all manifestation.

The opportunities for the reaching to the Potentiator are numerous.

However, of itself the Potentiator does not enter manifestation.

Questioner: Would the half moon on the crown represent the receptivity of the subconscious mind?

Ra: I am Ra. This symbol is not given by Ra but it is not distasteful for within your own culture the moon represents the feminine, the sun the masculine.

Thusly we accept this portion as a portion of the image, for it seems without significant distortion.

Questioner: Was the symbol on the front of the Priestess’s shirt given by Ra?

Ra: I am Ra. The crux ansata is the correct symbol.

The addition and slight distortion of this symbol thereby is astrological and may be released from its stricture.

Questioner: Would this crux ansata then be indicating the sign of life as the spirit enlivening matter?

Moreover, it illuminates a concept which is a portion of the archetype which has to do with the continuation of the consciousness which is being potentiated, in incarnation, beyond incarnation.

Questioner: Were the grapes depicted on the cloth over her shoulder of Ra’s communication?

Questioner: We have those as indicating the fertility of the subconscious mind. Is that correct?

Ra: I am Ra. This is correct, O student, but note ye the function of the mantle.

There is great protection given by the very character of potentiation.

To bear fruit is a protected activity.

Questioner: The protection here seems to be depicted as being on the right-hand side but not the left.

Would this indicate that there is protection for the positive path but not for the negative?

Ra: I am Ra. You perceive correctly an inborn bias offering to the seeing eye and listing ear information concerning the choice of the more efficient polarity.

We would at this time, as you may call it, suggest one more full query.

Questioner: I have planned to re-draw the tarot cards omitting the extraneous additions by those who came after Ra and I would like quickly to go through those things that I intend to eliminate from each card and ask Ra if there is anything else that should be eliminated to make the cards as they were before the astrological and other appendages were added.

I would eliminate all of the letters from the edge of the card with the possible exception of the number of the card.

That would be the case for all of the cards.

On the second card
we should remove the letters and the stars.

At the center of the female form here she is wearing something that looks something like a crux ansata and we should change that. Is that correct?

Ra: I am Ra. We perceive an incomplete query.

Questioner: I think that I should put a crux ansata in the place of this thing that looks a little like a crux ansata on the front of the female. Is that correct?

Questioner: Then as to the thing that she wears on her head, that, I believe, is a bit confusing.

Ra: I am Ra. We shall allow the student to ponder this point.

We note that although it is an astrologically based addition to the concept complex it is not entirely unacceptable when viewed with a certain feeling.

Therefore, we suggest, O student, that you choose whether to remove the crown or to name its meaning in such a way as to enhance the concept complex.

Questioner: Would Ra please give me any information possible on the ratios of dimensions, and the shape of the crux ansata as it should be made or drawn?

Last modified on Monday, 09 December 2019 23:04
Tweet
More in this category: Ra's In-depth Analysis of Archetype 3: Catalyst Of The Mind - The Empress »
Login to post comments
back to top