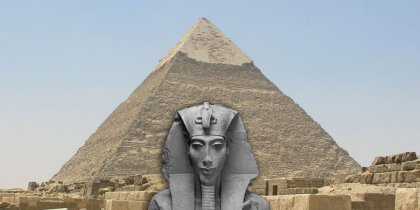 The Average Lifespan of Egyptians During Akhenaten's Reign

Questioner: Then at this time you did not contact them.

Can you answer the same question that I just asked with respect to your next attempt to contact the Egyptians?

Ra: I am Ra. The next attempt was prolonged.

It occurred over a period of time.

The nexus, or center, of our efforts was a decision upon our parts that there was a sufficient calling to attempt to walk among your peoples as brothers.

We laid this plan before the Council of Saturn,
offering ourselves as service-oriented Wanderers of the type which land directly upon the inner planes without incarnative processes.

Thus we emerged, or materialized, in physical-chemical complexes representing as closely as possible our natures, this effort being to appear as brothers and spend a limited amount of time as teachers of the Law of One, for there was an ever-stronger interest in the sun body, and this vibrates in concordance with our particular distortions.

We discovered that for each word we could utter, there were thirty impressions we gave by our very being, which confused those entities we had come to serve.

After a short period we removed ourselves from these entities and spent much time attempting to understand how best to serve those to whom we had offered ourselves in love/light.

The ones who were in contact with that geographical entity, which you know of as Atlantis, had conceived of the potentials for healing by use of the pyramid-shape entities.

In considering this and making adjustments for the difference as in the distortion complexes of the two geographical cultures, as you would call them, we went before the Council again, offering this plan to the Council as an aid to the healing and the longevity of those in the area you know of as Egypt.

In this way we hoped to facilitate the learning process as well as offer philosophy articulating the Law of One.

Approximately 11,000 of your years ago we entered, by thought-form, your—we correct this instrument.

We sometimes have difficulty due to low vitality.

Approximately 8,500 years ago, having considered these concepts carefully, we returned, never having left in thought, to the thought-form areas of your vibrational planetary complex and considered for some of your years, as you measure time, how to appropriately build these structures.

The first, the Great Pyramid, was formed approximately 6,000 of your years ago.

Then, in sequence, after this performing by thought of the building or architecture of the Great Pyramid using the more, shall we say, local or earthly material rather than thought-form material to build other pyramidal structures.

This continued for approximately 1,500 of your years.

Meanwhile, the information concerning initiation and healing by crystal was being given.

The one known as “Ikhnaton”
was able to perceive this information without significant distortion and for a time, moved, shall we say, heaven and earth in order to invoke the Law of One and to order the priesthood of these structures in accordance with the distortions of initiation and true compassionate healing.

This was not to be long-lasting.

At this entity’s physical dissolution from your third-density physical plane,
as we have said before, our teachings became quickly perverted, our structures once again went to the use of the so-called “royal” or those with distortions towards power.

Questioner: Can you tell me what happened to Ikhnaton after his physical death?

Ra: I am Ra. This entity was then put through the series of healing and review of incarnational experiences which is appropriate for third-density experience.

This entity had been somewhat in the distortions of power ameliorated by the great devotion to the Law of One.

This entity thus resolved to enter a series of incarnations in which it had no distortions towards power.

Questioner: Can you tell me what the average life span was for the Egyptians at the time of Ikhnaton?

Ra: I am Ra. The average life span of these people was approximately thirty-five to fifty of your years.

There was much, what you would call, disease of a physical complex nature.

Questioner: Can you tell me of the reasons for the disease?

I think I already know, but I think it might be good for the book to state this at this time.

Ra: I am Ra. This is, as we have mentioned before, not particularly informative with regard to the Law of One.

However, the land you know of as Egypt at that time was highly barbarous in its living conditions, as you would call them.

The river which you call Nile was allowed to flood and to recede, thus providing the fertile grounds for the breeding of diseases which may be carried by insects.

Also, the preparation of foodstuffs allowed diseases to form.

Also, there was difficulty in many cases with sources of water and water which was taken caused disease due to the organisms therein.

Questioner: I was really questioning about the more basic cause of disease rather than the mechanism of its transmission.

I was going back to the root of thought that created the possibility of disease.

Could you briefly tell me if I am correct in assuming the general reduction of thought over the long time on planet Earth with respect to the Law of One created a condition whereby what we call disease could develop?

Ra: I am Ra. This is correct and perceptive.

You, as questioner, begin now to penetrate the outer teachings.

The root cause in this particular society was not so much a bellicose action although there were, shall we say, tendencies, but rather the formation of a money system and a very active trading and development of those tendencies towards greed and power; thus, the enslaving of entities by other entities and the misapprehension of the Creator within each entity.