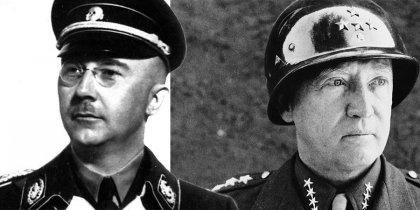 Questioner: Is it possible for you to use as an example our General Patton and tell me the effect that war had on him in his development?

Ra: I am Ra. This will be the last full question of this working.

The one of whom you speak, known as George, was one in whom the programming of previous incarnations had created a pattern or inertia which was irresistible in its incarnation in your time/space.

This entity was of a strong yellow ray activation with frequent green ray openings and occasional blue ray openings.

However, it did not find itself able to break the mold of previous traumatic experiences of a bellicose nature.

This entity polarized somewhat towards the positive in its incarnation due to its singleness of belief in truth and beauty.

This entity was quite sensitive.

It felt a great honor/duty to the preservation of that which was felt by the entity to be true, beautiful, and in need of defense.

This entity perceived itself a gallant figure.

It polarized somewhat towards the negative in its lack of understanding the green ray it carried with it, rejecting the forgiveness principle which is implicit in universal love.

The sum total of this incarnation vibrationally was a slight increase in positive polarity but a decrease in harvestability due to the rejection of the Law or Way of Responsibility; that is, seeing universal love, yet still it fought on.

That is an important example I believe.

I was wondering if any of those who were subordinate to Adolf at that time were able to polarize in a harvestable nature on the negative path?

Ra: I am Ra. We can speak only of two entities who may be harvestable in a negative sense, others still being in the physical incarnation:

one known to you as Hermann;
the other known, as it preferred to be called, Himmler.

Questioner: Is the higher self of every entity of a sixth-density nature?

This is an honor/duty of self to self as one approaches seventh density.

Questioner: Let me be sure that I understand this then.

We have spoken of certain particular individuals.

For instance we were speaking of George Patton in a previous communication.

Then his higher self at the time of his incarnation here as George Patton about forty years ago was of sixth-density? is this correct?

We make note at this time that each entity has several beings upon which to call for inner support.

Any of these may be taken by an entity to be the mind/body/spirit complex totality.

However, this is not the case.

The mind/body/spirit complex totality
is a nebulous collection of all that may occur held in understanding;

Questioner: These channels would then be opened by meditation and I am assuming that the intense polarization would help in this. Is this correct?

Intense polarization does not necessarily develop, in the mind/body/spirit complex, the will or need to contact the Oversoul.

Each path of life experience is unique.

However, given the polarization, the will is greatly enhanced and visa-versa.

Questioner: Let me take as an example the one that you said was called Himmler.

We are assuming from this that his higher self was of the sixth-density and it was stated that Himmler had selected the negative path.

Would his higher self then dwell in a sixth-density negative type of situation?

Can you expand on this concept?

There are no negative beings which have attained the Oversoul manifestation, which is the honor/duty of the mind/body/spirit complex totality, of late sixth-density as you would term it in your time measurements.

These negatively oriented mind/body/spirit complexes have a difficulty which to our knowledge has never been overcome, for after fifth-density graduation wisdom is available but must be matched with an equal amount of love.

Therefore, the Oversoul which makes its understanding available to all who are ready for such aid is towards the positive.

However, the free will of the individual is paramount, and any guidance given by the higher self may be seen in either the positive or negative polarity depending upon the choice of a mind/body/spirit complex.

Questioner: Then using Himmler as an example, was his higher self at the time he was incarnate in the 1940s a sixth-density positively oriented higher self?

Questioner: Was Himmler in any way in contact with his higher self at that time when he was incarnate during the 1940s?

Ra: I am Ra. We remind you that the negative path is one of separation.

What is the first separation: the self from the self.

The one known as Himmler did not choose to use its abilities of will and polarization to seek guidance from any source but its conscious drives, self-chosen in the life experience and nourished by previous biases created in other life experiences.

Questioner: Well then let’s say that when Himmler reaches sixth-density negative, would he realize that his higher self was positively oriented and for that reason make the jump from negative to positive orientation?

It observes the spiritual entropy occurring due to the lack of ability to express the unity of sixth-density.

Thus, loving the Creator and realizing at some point that the Creator is not only self but other-self as self, this entity consciously chooses an instantaneous energy reorientation so that it may continue its evolution.