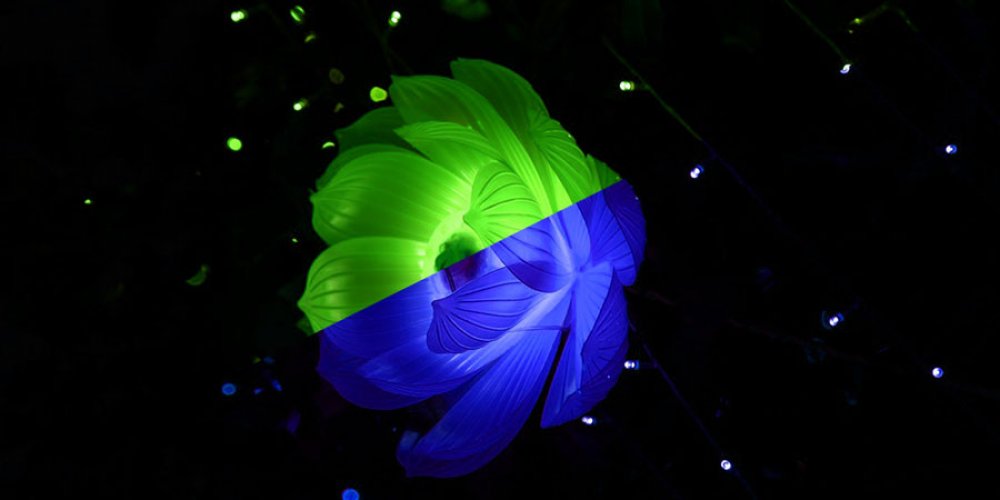 Questioner: You just used the term third ray in that statement.

Was that the term you meant to use?

Ra: I am Ra. We intended the green ray.

Our difficulty lies in our perception of red ray and violet ray as fixed; thus the inner rays are those which are varying and are to be observed as those indications of seniority in the attempts to form an harvest.

Questioner: Would the red ray, an intense red ray, then be used as an index for seniority in incarnation as well as an intense violet ray?

In the graduation or harvesting to fourth-density positive,
the red ray is seen only as that, which being activated, is the basis for all that occurs in vibratory levels, the sum of this being violet ray energy.

This violet ray
is the only consideration for fourth-density positive.

In assessing the harvestable fourth-density negative,
the intensity of the red as well as the orange and the yellow rays is looked upon quite carefully as a great deal of stamina and energy of this type is necessary for the negative progression, it being extremely difficult to open the gateway to intelligent infinity from the solar plexus center.

This is necessary for harvest in fourth-density negative.

Questioner: Then is sixth-density harvest strictly of a social memory complex nature because again we have wisdom and compassion blended back using wisdom?

Questioner: The physical vehicle that is used in fourth-density space/time is, I am assuming, quite similar to the one that is now used in third density.

Ra: I am Ra. The chemical elements used are not the same.

However, the appearance is similar.

Questioner: On this planet after the harvest is complete, will fourth-density beings be incarnate on the surface as we know it now?

Ra: I am Ra. The probability/possibility vortices indicate this to be most likely.

Questioner: Then will there be at that time any fifth-density or sixth-density beings on the surface of the planet?

Ra: I am Ra. Not for a fairly long measure of your time as fourth-density beings need to spend their learn/teaching space/time with their own density’s entities.

Questioner: Then basically what you are saying is that at that point the teachings of fifth or sixth-density beings would not be too well understood by the new fourth-density beings?

Ra: I am Ra. Do you wish to query us upon this point?

Questioner: I guess I didn’t state that correctly.

Would the new fourth-density beings then need to evolve in their thinking to reach a point where fifth-density lessons would be of value?

Ra: I am Ra. We grasp the thrust of your query.

Although it is true that as fourth-density beings progress they have more and more need for other density teachings, it is also true that just as we speak to you due to the calling, so the information called is always available.

Questioner: I was wondering, then, if the mechanism of teach/learning was the same relatively then in fourth density.

From what you say, it is necessary first for a call to exist for the teach/learning of fifth density to be given to fourth just as a call must exist here before fourth-density lessons are given to third density.

Ra: I am Ra. This query is misguided, for experience in fourth density is emphatically not the same as third-density experience.

However, it is correct that the same mechanism of calling predisposes the information received in a way consonant with free will.

You may ask one more full question at this working.

Do these two values correspond to the same rate, shall I say, of vibration?

Ra: I am Ra. I perceive you have difficulty in expressing your query.

We shall respond in an attempt to clarify your query.

The vibratory rates are not to be understood as the same in positive and negative orientations.

They are to be understood as having the power to accept and work with intelligent infinity to a certain degree or intensity.

Due to the fact that the primary color, shall we say, or energy blue is missing from the negatively oriented system of power, the green/blue vibratory energies are not seen in the vibratory schedules or patterns of negative fourth and fifth rates of vibration.

Each is capable of doing fourth-density work.

This is the criterion for harvest.

Questioner: Did you say that blue was missing from fourth-density negative?

Ra: I am Ra. Let us clarify further.

As we have previously stated, all beings have the potential for all possible vibratory rates.

Thus the potential of the green and blue energy center activation is, of course, precisely where it must be in a creation of Love.

negatively polarized entity
will have achieved harvest due to extremely efficient use of red and yellow/orange, moving directly to the gateway indigo bringing through this intelligent energy channel the in-streamings of intelligent infinity.

Ra: I am Ra. There are, in your modes of thinking, responses we can make, which we shall make.

However, the important point is that the graduations from density to density do occur.

The positive/negative polarity is a thing which will, at the sixth level, simply become history.

Therefore, we speak in an illusory time continuum when we discuss statistics of positive versus negative harvest into fifth.

A large percentage of fourth-density negative entities
continue the negative path from fourth to fifth-density experience, for without wisdom the compassion and desire to aid other-self is not extremely well informed.

Thus though one loses approximately two percent moving from negative to positive during the fourth-density experience we find approximately eight percent of graduations into fifth density those of the negative.

Does an entity have to be 99% polarized for negative and maybe 80% polarized positive for graduation?

Ra: I am Ra. We perceive the query now.

To give this in your terms is misleading for there are, shall we say, visual aids or training aids available in fourth density which automatically aid the entity in polarization while cutting down extremely upon the quick effect of catalyst.

Thus the density above yours must take up more space/time.

The percentage of service-to-others of positively oriented entities will harmoniously approach 98% in intention.

The qualifications for fifth density, however, involve understanding.

This then, becomes the primary qualification for graduation from fourth to fifth density.

To achieve this graduation the entity must be able to understand the actions, the movements, and the dance.

There is no percentage describable which measures this understanding.

It is a measure of efficiency of perception.

It may be measured by light.

The ability to love, accept, and use a certain intensity of light thus creates the requirement for both positive and negative fourth to fifth harvesting.

Questioner: Is there any difference close to the end of fifth-density in the disciplines of personality between positive and negative orientation?

Ra: I am Ra. There are patent differences between the polarities but no difference whatsoever in the completion of the knowledge of the self necessary to accomplish this discipline.

Last modified on Tuesday, 14 May 2019 23:21
Tweet
More in this category: Physical Resemblance of 4th & 5th Density Entities Compared to Humans »
Login to post comments
back to top