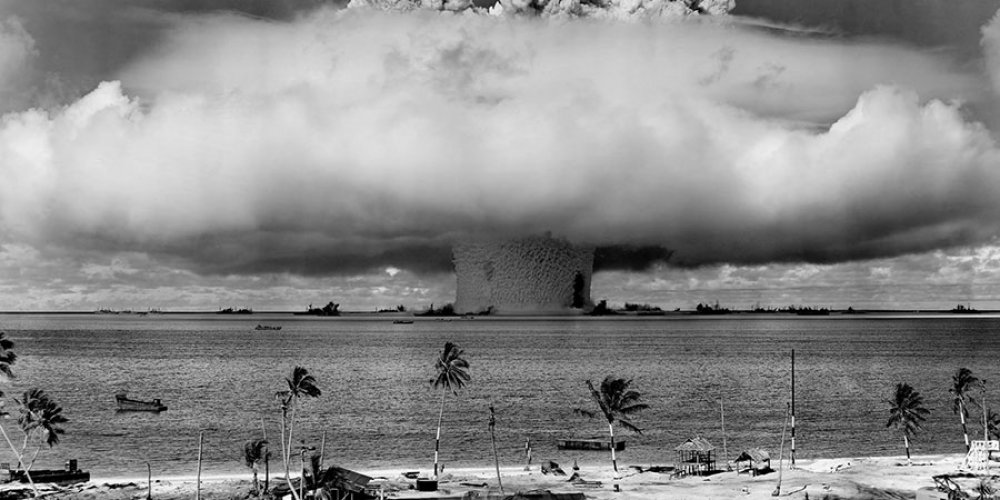 The Law of One, Book V, Fragment 8

Questioner: Then was the Confederation responsible for the Earth receiving nuclear power?

Ra: I am Ra. It is a point which one cannot judge what is cause.

The basic equation which preceded this work was an equation brought through by a Wanderer dedicated to service to the planet.

That this work should have become the foundation for instruments of destruction was not intended and was not given.

Questioner: Can you tell me who this Wanderer was who brought through the equation?

Ra: I am Ra. This information seems harmless as this entity is no longer of your planetary third density.

Questioner: Is there any particular race of people on our planet now who were incarnated here from second density?

Ra: I am Ra. There are no second-density consciousness complexes here on your sphere at this time.

there are two races which use the second-density form.

One is the entities from the planetary sphere you call Maldek.
These entities are working their understanding complexes through a series of what you would call karmic restitutions.

They dwell within your deeper underground passageways and are known to you as “Bigfoot.”

The other race
is that being offered a dwelling in this density by guardians who wish to give the mind/body/spirit complexes of those who are of this density at this time appropriately engineered physical vehicles, as you would call these chemical complexes, in the event that there is what you call nuclear war.

Questioner: I didn’t understand what these vehicles or beings were for that were appropriate in the event of nuclear war.

Ra: I am Ra. These are beings which exist as instinctual second-density beings which are being held in reserve to form what you would call a gene pool in case these body complexes are needed.

Questioner: Where are these body complexes located?

Ra: I am Ra. These body complexes of the second race dwell in uninhabited deep forest.

There are many in various places over the surface of your planet.

Questioner: When Maldek was destroyed, did all the people of Maldek have the fear problem or were some advanced enough to transfer to other planets?

Ra: I am Ra. In the occurrence of planetary dissolution none escaped, for this is an action which redounds to the social complex of the planetary complex itself.

None escaped the knot or tangle.

Questioner: Is there any danger of this happening to Earth at this time?

Ra: I am Ra. We feel this evaluation of your planetary mind/body/spirit complexes’ so-called future may be less than harmless.

We say only the conditions of mind exist for such development of technology and such deployment.

It is the distortion of our vision/understanding that the mind and spirit complexes of those of your people need orientation rather than the “toys” needing dismantlement, for are not all things that  exist part of the Creator?

Therefore, freely to choose is your own duty.

Questioner: Could you give us an example from Hiroshima or Nagasaki of how this is done?

Ra: I am Ra. Those who were destroyed, not by radiation, but by the trauma of the energy release, found not only the body/mind/spirit complex made unviable, but also a disarrangement of that unique vibratory complex you have called the spirit complex, which we understand as a mind/body/spirit complex, to be completely disarranged without possibility of re-integration.

This would be the loss to the Creator of part of the Creator and thus we were given permission, not to stop the events, but to ensure the survival of the, shall we say, disembodied mind/body/spirit complex.

This we did in those events which you mention, losing no spirit or portion or holograph or microcosm of the macrocosmic Infinite One.

Questioner: Could you tell me just vaguely how you accomplished this?

Ra: I am Ra. This is accomplished through our understanding of dimensional fields of energy.

The higher or more dense energy field will control the less dense.

Questioner: Then you are saying that, in general, you will allow the population of this planet to have a nuclear war and many deaths from that war, but you will be able to create a condition where these deaths will be no more traumatic than entrance to what we call the heaven worlds or the astral world due to death by a bullet or by the normal means of dying by old age.

It would be more traumatic.

However, the entity would remain an entity.

Questioner: Can you tell me the condition of the entities who were killed in Nagasaki and Hiroshima at this time?

Ra: I am Ra. They of this trauma have not yet fully begun the healing process.

They are being helped as much as is possible.

Questioner: When the healing process is complete with these entities, will this experience of death due to nuclear bomb cause them to be regressed in their climb towards fourth density?

Ra: I am Ra. Such actions as nuclear destruction affect the entire planet.

There are no differences at this level of destruction, and the planet will need to be healed.

Questioner: I was thinking specifically if an entity was in Hiroshima or Nagasaki at that time and he was reaching harvestability at the end of our cycle, would this death by nuclear bomb create such trauma that he would not be harvestable at the end of the cycle?

Once the healing has taken place the harvest may go forth unimpeded.

However, the entire planet will undergo healing for this action, no distinction being made betwixt victim and aggressor, this due to damage done to the planet.

Questioner: Can you describe the mechanism of the planetary healing?

Ra: I am Ra. Healing is a process of acceptance, forgiveness, and, if possible, restitution.

The restitution not being available in time/space, there are many among your peoples now attempting restitution while in the physical.

Questioner: How do these people attempt this restitution in the physical?

Ra: I am Ra. These attempt feelings of love towards the planetary sphere and comfort and healing of the scars and the imbalances of these actions.

Questioner: Backtracking just a little bit today I would like to know if the reason nuclear energy was brought into this density forty or so years ago had anything to do with giving the entities who were here who had caused the destruction of Maldek another chance to use nuclear energy peacefully rather than destructively?

Ra: I am Ra. This is incorrect in that it places cart before horse, as your people say.

The desire for this type of information attracted this data to your people.

It was not given for a reason from outside influences; rather it was desired by your peoples.

From this point forward your reasoning is correct in that entities had desired the second chance which you mentioned.

Questioner: What was the mechanism for fulfilling the desire for the information regarding nuclear energy?

Ra: I am Ra. As we understand your query the mechanism was what you may call inspiration.

Questioner: Would this inspiration be an entity impressing the person desiring the information with thoughts?

Would this be the mechanism of inspiration?

Ra: I am Ra. The mechanism of inspiration involves an extraordinary faculty of desire or will to know or to receive in a certain area accompanied by the ability to open to and trust in what you may call intuition.

Last modified on Saturday, 20 October 2018 01:17
Tweet
More in this category: The Advent of Industrial Revolution »
Login to post comments
back to top